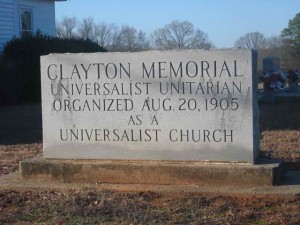 As near as we can determine, the congregation began meeting somewhere in the 1840s and met in parlors, on porches, and at a spring near the Halfacre home.  An entry dated 1867 at the Clerk of Court of Newberry County states, “One acre of land shall be set aside for a family cemetery.”  The building itself was constructed in 1906 on land at the cemetery using lumber provided by a sawmill owned by Benjamin Halfacre.

As is often the case with events from the turbulent years before, during, and after the Civil War, information is often dependent on personal memories passed down through generations. Below is a history of the cemetery, as recalled by one of the congregation’s senior members, Mary Nell Eargle (August 18, 1930 – ) on Sunday, Sept. 9, 1990. She wrote the following from information given to her by her father, Walton Benjamin Halfacre (October 1, 1906 – December 1994), who stated that these were the stories as he remembers being told down through the years: 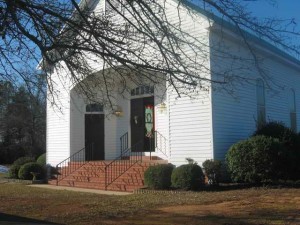 Major David Halfacre was raised in the vicinity of Cannons Creek and now Highway 219. He bought what was known as the Piester and Gray Plantation. He operated the Piester Mill.  Later, he built what is known as the Major David & Christina Halfacre home, being livable at the beginning of the Civil War.  In settling up his estate, Lizzie Halfacre received the old home place because Major David thought his two sons could build their own homes.  Lizzie later married Dave Ruff and by them were two children, namely, David and Christina Ruff.

David Ruff built his home on Highway 219, and Christina heired the old home place. Her adopted son, Doyle Lee Gallman and his wife Mary Nell Wilson Gallman, heired the old home place and take pride in its upkeep and historical value.  The third story of this mansion is a large room which was used during the Confederate War for the purpose of transacting business relating to the war, etc.  One of the organizations that my father had always heard that used it was the Red Shirts.

While Major David Halfacre lived in the dwelling, his young son became ill, and realizing that he wasn’t going to live long, both decided to establish his own burial place on the knoll plainly in view of the mansion.  This burial of the young son was the first in what is now known as Clayton Memorial Cemetery.  A while later Major David Halfacre moved the bodies of two older sons from the Halfacre Cemetery (which is located at Highway 219 and Landfill Road) to Clayton Memorial Cemetery.  One of the two boys was killed at the 2nd Battle of Manassas and the other boy died of a disease in Charleston.  Walton B. Halfacre stated that he always heard that a slave drove the wagon (containing the body) from Charleston to Newberry and that Major David Halfacre rode a horse out in front of the wagon to clear the way and possibly to note any danger.

1/25/18 — info from provided by a member:  I just got the Universalist yearbooks for 1905-08. Clayton Memorial appears for the first time in the yearbook of 1908.  It mentions that the new church building was dedicated in September 1906 and that Rev. Shinn (a famous Universalist missionary) preached his last sermon at Clayton in June 17, 1907, shortly before he died.  It lists Clayton Memorial with five families, seventeen members, and eighteen in Sunday School.  J.B. Halfacre was the church clerk.  D.S. Halfacre was secretary of the state convention.  No minister was listed.  Clayton was listed as the smallest of the five listed Universalist churches in the state.  No minister is listed as living in S.C.  Thomas Chapman who served the church for many years is listed in N.C. at that date.  I thought you and others might find this interesting.